A record 73 transportation projects from 36 states and the District of Columbia were nominated in the 7th annual competition. The 10 projects that received the highest number of points in four regional competitions were in the running for the top prizes announced today, at the AASHTO Annual Meeting in Charlotte.

“There were many projects worthy of recognition in this year’s competition,” said Bud Wright, AASHTO executive director. “But the Caltrans and Florida DOT projects exemplify the best of the best. Their use of innovation and creative problem-solving improved the lives of the nearby communities and their economies. We sincerely tip our hats to all the hard working professionals who helped make these projects a reality.”

Caltrans’ San Francisco–Oakland Bay Bridge East Span project received the Grand Prize, determined by a panel of judges. The $6.3 billion project replaced a nearly 80-year-old structure with a new, modern bridge featuring advanced seismic response technology. The bridge, which was constructed to last more than 100 years, is designed to accommodate future expansions of light rail and other modes of transportation. 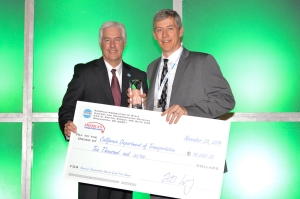 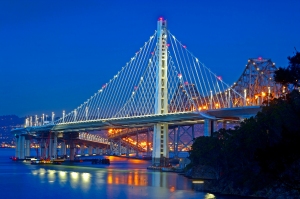 FDOT’s Mathews Bridge Impact and Emergency Response Project earned more than 300,000 online votes, making it the winner of the People’s Choice Award. In September 2013, a vessel collided with the Mathews Bridge – causing $3.8 million in damage to the structure. FDOT’s emergency repair plan reopened the vital Jacksonville crossing to vehicle traffic only 33 days after the collision and 12 days ahead of schedule 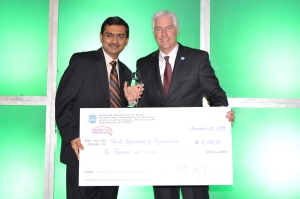 “AAA congratulates Caltrans and Florida DOT for these two award-winning projects that clearly illustrate the mobility and safety benefits gained from well planned and executed transportation projects,” said Jill Ingrassi, AAA managing director of government relations and traffic safety advocacy. “Shining a spotlight on projects like these that are under budget, innovative and add value to the community and quality of life reinforces how important transportation investment is to our daily lives.”

All of the projects in the competition were judged in three categories: “Under Budget,” “Best Use of Innovation,” and a new category this year “Quality of Life/Community Development.”

“The Chamber is proud to help highlight the creative and effective work being done around the country to improve America’s transportation and infrastructure systems,” said Janet Kavinoky, executive director of Transportation and Infrastructure at the U.S. Chamber of Commerce. “Projects like Caltrans’ and the Florida DOT’s are making a real difference in repairing and modernizing our nation’s infrastructure. Their positive impacts are evident and should serve as examples of the potential for innovation and improvement in other states and communities.”

The Grand Prize and People’s Choice award winners were presented with $10,000 cash prizes to be used to support a charity or transportation-related scholarship program of the agencies’ choosing.