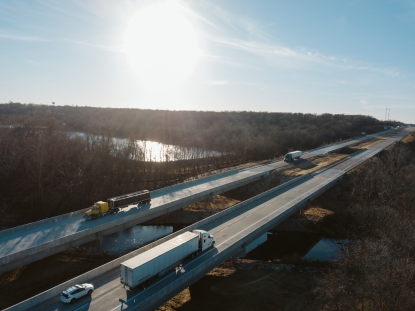 I-44 is an important route for commerce in the State of Missouri and the country at large, as a large number retailers have their warehouses and distribution centers located in the area and others depend on the route for shipping. Yet many of the bridges – originally built in the 1960’s during the completion of I-44 between the Illinois and Oklahoma state lines – had deteriorated. The Missouri Department of Transportation embarked on a $36.1 million rebuilding effort that improved safety, saved time for drivers, and kept freight (and the economy) moving. MoDOT replaced 13 bridges and provided significant updates to six others. Bridge projects were bundled together to work on several at a time without disrupting traffic. The MoDOT team also developed and implemented the largest smart work zone in the district, deploying 36 changeable message boards that alerted drivers to congestion and delays. This allowed this busy connector to continue to transport goods while doing it short period time.